Ask about our brand-new Freightliners! Our entire fleet updated. 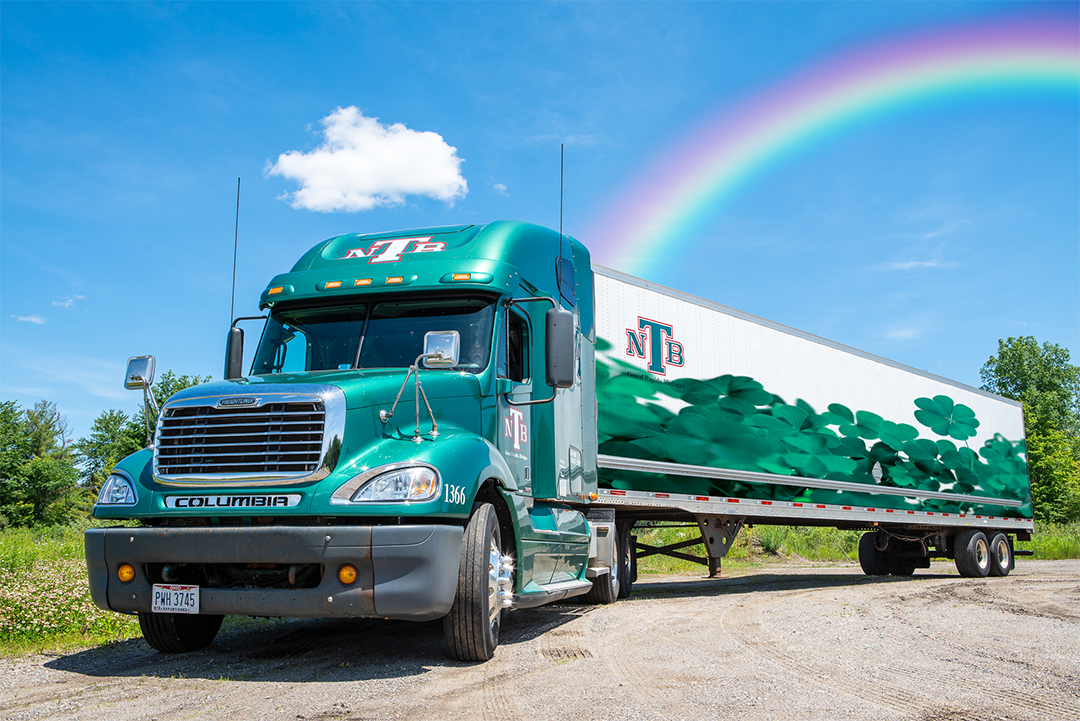 It’s St. Patrick’s Day week! A time when all of us at NTB begin to welcome spring and celebrate all that is Irish. Whatever your ethnic heritage is, everyone's got a bit of Irish in them this time of year. So, don something green and think about what it might be like if you drove a lorry in Ireland.

Tractor-trailers are commonly referred to as lorries in Ireland. The term lorry possibly comes from the rail industry in northern England. Most, if not all lorries are cab-over tractors which, for the uninitiated, means the cab sits over the engine rather than behind like most trucks in the United States. Even though Ireland is very small, some of the lorries have sleeper cabs for those longer hauls.

The island of Ireland, including the Republic of Ireland and Northern Ireland, is only 32,595 mi², which is about 7,500 mi² smaller than Michigan’s Lower Peninsula. While the highways are modern, the roads to smaller villages are often very narrow, with many curves, and closely lined with 12-15 foot hedges.

During the tourist season, these seemingly local-only roads are heavily traveled by motor coaches, tourists in passenger cars, lorries, and local residents. It can be completely disorienting for an American, who may be referred to as a Yank, to drive these roads in the wrong (right) side of the car and on the wrong (left) side of the road. Add in the many roundabouts and one-way streets lined with parked cars facing both directions and one might feel like Mr. Bean driving to the dentist.

In Ireland, St. Patrick’s Day is a religious holiday. The Irish in smaller villages celebrate by attending a church service and avoiding the pubs. The raucous street parties, heavy drinking, and even that famed corned beef and cabbage dinner on March 17 are truly an American invention. If you’d like to have a true Irish feast to celebrate, a traditional lamb stew and Irish soda bread slathered in butter would fit the bill – and they pack well for the road. Add some foot-tapping Irish music to the mix and you may think you feel the wind of the Isle on your face.

Stay safe this week NTB drivers, as it’s a good idea in the States to watch out for drivers who have been celebrating the Americanized version of this holiday as you make your way to your destination.

Happy St. Patrick’s Day from all of us at NTB and enjoy this video of lorries and drivers in Ireland.

NTB celebrates all ethnic origins:  Apply to drive with NTB