Our mission is to honor and glorify the Lord by being the best truckload carrier in our operating region through our service to our customers, employees and shareholders. 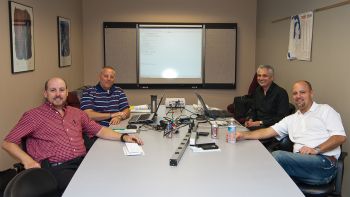 Since being founded in 1974 by Dan Koster, NTB has grown into a very successful truckload carrier in the Midwest and surrounding regions. Our goal of consistent, high-quality service fosters lasting relationships with our customers and partners.  These relationships open the door to increased productivity and profitable cooperation that benefit not only our customers but our employees as well.

With our fleet of roughly 235 trucks and more than 830 trailers deployed throughout our operating regions, we strive to rapidly respond to the changing needs of our customers.  This effort is also reflected as the increasing demands of technology are being integrated into our system.  This integration has automated much of the logistics, dispatch, communication, maintenance, and billing systems which, again, benefits both our customers and employees.

As our Mission states, we want to be the best.  Each day we do what we can to make that happen for those that trust their freight and livelihood to us.

Dan Koster founded Nationwide Truck Brokers, Inc., in 1974. His father hauled produce from Ohio and West Virginia for VanderBunte Brothers. Dan gained a love for trucks and began driving at the age of sixteen. He attended Hudsonville High School and served in the U.S. Army's Second Infantry in Fairbanks, Alaska. After an honorable discharge, he returned home where he met Ardith Flagel. They married on October 17, 1958.

Dan drove for Bob Meeuusen Trucking for two years. Then he became an owner-operator for Superior Brand Produce and hauled produce from Florida to Michigan for fourteen years. Through the years, Dan gained experience with truckers, shippers, and receivers. At the age of thirty-seven, Dan decided that it was important to spend more time with his wife and three sons, and felt he could stay closer to home while brokering loads nationwide. So he gained backing from Roger VerLee, who owned Berghorst Poultry, and a partnership was formed. This was the beginning of Nationwide Truck Brokers.

In 1984, Dan Koster and his sons acquired sole ownership of the corporation, buying Roger VerLee's stock in NTB. Dan attributed the company's successful beginning to Roger being a very good partner.

As a brokerage, dependable trucking companies were hard to find, so Dan began buying his own tractors and trailers. Due to customer needs, NTB transitioned from a long-haul carrier to a regional carrier. This transition provided greater lane density which allowed for improved customer service. One of the intended ends that was in view as NTB made these changes was to develop a pattern of business that was more family friendly.

The company flourished, and offices have been established in several locations with the headquarters still in Grand Rapids, Michigan. Dan enjoyed seeing the business grow to what it is today with the numerous tractors and trailers that travel the highways and byways of Michigan, Indiana, Illinois, Iowa, Ohio, Kentucky, and Wisconsin.

Much to the sadness of his employees, Dan Koster passed away September 16, 1996, at the age of fifty-nine. His three sons, Rick, Greg, and Kurt, who worked by their father's side for many years, have become the owners of NTB. They named Henry Schwarz, formerly Senior Vice President of NTB, as their new President.

Dan lived a full life and sought to glorify God in all he did. He once stated, "I have to give all the glory for this success to the Lord, Jesus Christ, because everything I have belongs to Him. He is just allowing me to use it while I am here on this earth. I would also like to give credit to the many faithful, dependable employees I have had over the years."

The future of NTB shines brightly, and the new leaders will continue to carry on Dan's legacy in the same faithful manner.