4 Million Safe Miles—How One Driver Got It Done 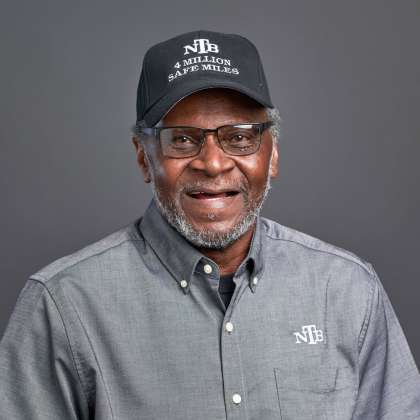 You must be thinking that it is a typo. Surely, 4 Million Miles of truck driving, all without incident, couldn’t be possible. Well, it’s true, and NTB Trucking has the driver to prove it.

If you ever have the opportunity to meet Jerry Subbs in person, you’ll be greeted with a smile that will prompt you to smile in return. Jerry is a joy-filled human who brings happiness to those he meets.

Out of his 71 years, 40 have been spent driving with NTB, Inc., and Jerry’s schedule is a bit different than most other NTB drivers. He drives for about a month at a time while living in his truck, then flies out of Lansing to his home in Florida for a week or so. As other drivers experience, each day is filled with 14 hours of drive time, followed by a 10-hour break for meals and sleep. While this schedule may not work for all people, it is the perfect day for Jerry.

Jerry likes to keep his truck, which acts as his workspace as well as his home for much of the time, clear of any clutter. It is his space to work, to eat, to sleep, and to unwind at the end of the day. Well equipped with cabinets, a refrigerator, and a microwave, Jerry’s truck has all he needs while he is on the road.

Jerry’s go-to meals are cereal and milk for breakfast and a rotisserie chicken from Meijer for dinner. A handful of nuts is often what he’ll have for a snack. With an interest in staying informed about world affairs, Jerry likes to listen to CNN while driving.

How He Got It Done

Most people will never travel 4 million miles in their lifetime. Even when driving is your career, 4 million miles is a full career’s worth. When each mile has been driven safely, that’s something to talk about. Jerry has indicated that he is not finished yet and that, while those miles were important, each mile on the road ahead is even more important.

We asked Jerry if he had any advice for new drivers and here’s what he had to say. Jerry’s work ethic is to represent NTB in the best way possible. He believes that as a driver, it is his job to follow what NTB tells him to do, and not to try to do things his own way. This has obviously worked out well for Jerry, for NTB, and for the trucking industry as a whole. When a driver comes across as professionally as Jerry does, he or she makes a good representation for the entire industry.

Jerry would also like new drivers to know that it’s always a good idea to know your route and stick to it. Getting into a city with narrow roads or tight turns can be intimidating, so it’s always good to confidently know where you are going. Take your time and get there safely. The most challenging part of driving in the Midwest is learning to drive on icy roads. Slow down and don’t get into the habit of following other trucks too closely.

So, one big shout out to Jerry Subbs—you are a very valued member of NTB’s team. Matt Tawney of NTB says “One thing about Jerry—once drivers get seniority, they might start to expect privileges. Jerry never asks for special privileges. Jerry is very humble and very giving about his time, his work, and his attitude.”

Help us in congratulating Jerry Subbs on this huge milestone by leaving a comment below or on our Facebook Page.

Looking for a company that values its employees?  apply to drive with NTB.